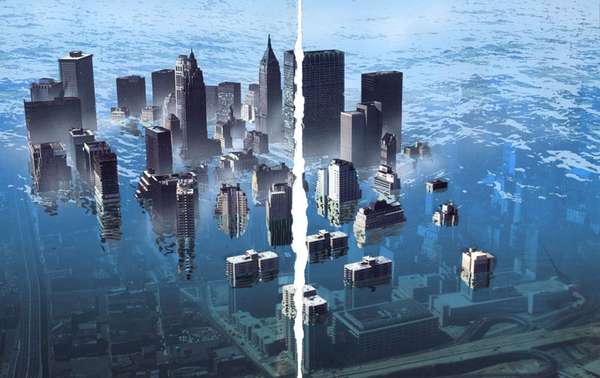 As an artist, Alex Lukas benefits greatly from his technical proficiency. His work is detailed, sharp, and original. His technical ability likely comes from his formal training at the prestigious Rhode Island School of Design, where he earned his BFA in 2003. Lukas' unusual and very distinctive aesthetic have helped him garner attention from art galleries around the world. His work has been exhibited as far away as the Galleri Loyal in Stockholm, Sweden, as well as the Telefon Tel Chefen gallery in Copenhagen, Denmark.

As an artist, Alex Lukas' biggest skill is his ability to create stark contrasts with his work. While one illustration shows a major metropolis underwater, another shows a series of buildings with roof gardens growing out of every single one. Without making an explicit statement, Lukas makes one implicitly by offering these illustrations side-by-side.

Up next for Alex Lukas: A solo show at the Guerrero Gallery in San Francisco from September 10th-October 8th 2011.
2.7
Score
Popularity
Activity
Freshness
Get the 2021 Trend Report FREE