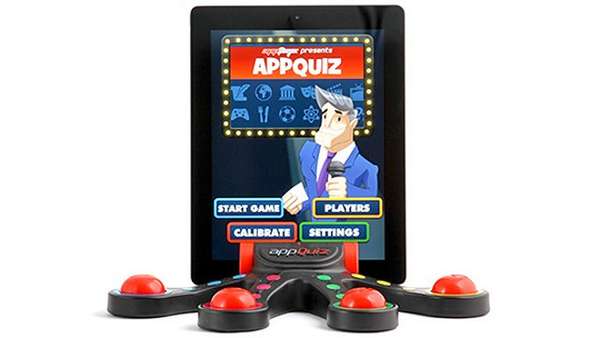 Trenton Millar — September 2, 2012 — Tech
References: apptoyz & ohgizmo
Most people will never get to be on a game show, but the AppQuiz gaming device lets you play game shows from the comfort of your home, and the bonus is you get to play against your friends. This iPad dock features four buzzers that allow you and your friends to play a variety of different app games against each other, game show style.

AppQuiz comes with a quiz show game that has over 4,000 questions. The show is hosted by virtual host Chuck Boldhart who keeps things entertaining. There are also a number of mini-games that can be played using the AppQuiz.

The AppQuiz is best suited for the iPad, but it also is compatible with the iPhone. The smaller screen on the iPhone means that you and your friends have to get a lot more friendly so everyone can see the screen though.
1
Score
Popularity
Activity
Freshness

Favor-Swapping Mobile Games
Connect With Your Neighbors By Playing Favortree