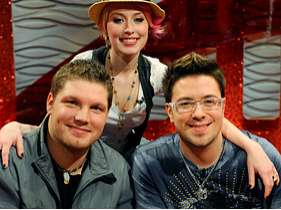 Going Like Sixty — February 19, 2009 — Fashion
References: randyjacksoneyewear & tvwatch.people
Share on Facebook Share on Twitter Share on LinkedIn Share on Pinterest
Danny Gokey, a highly-regarded top 12 competitor on ‘American Idol,’ certainly has a compelling story, but the biggest statement he may be making is with his eyewear. So far, Danny Gokey has worn three different pairs of Versace eyeglasses for performances. While Gokey has appeared on ‘American Idol’ without glasses, he now seems to have embraced the look.

A young widower who is a church music director, Danny Gokey may seem an unlikely endorsement candidate for the Versace brand. But as ‘American Idol’ plows on and Danny Gokey’s glasses get more and more air time, a deal with Versace is sure to be forthcoming. Randy Jackson has his own line of eyewear and must be loving the fact that eyeglasses are hot again. Can Danny Gokey create the same buzz as Sarah Palin? I’m thinking yes, because of his prolonged television exposure and star potential. Paula Abdul has been rocking some fancy eyewear on set as well, the Prada 14IV eyeglasses.
5.8
Score
Popularity
Activity
Freshness
Get Trend Hunter Dashboard

Creative Exploration Apps
E.gg Taps Into the Experimental Early Days of the Internet