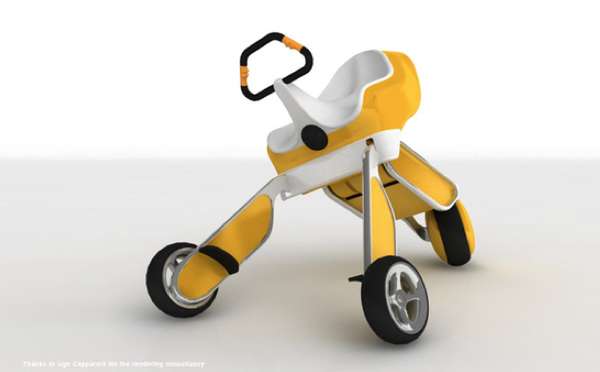 Amantide Electric Trike Breaks with Convention for a Unique Conveyance

Amelia Roblin — June 3, 2011 — Autos
References: industrialdesignserved
Share on Facebook Share on Twitter Share on LinkedIn Share on Pinterest
There are many reasons why an engineer may be inclined to installed two wheels at the back of an automobile, and one at the front, should he have only three to work with, but Florentin Hortopan, the designer of the Amantide Electric Trike, cares little for this custom and enjoys playing with new ways to rethink existing objects.

This unusual collapsible tricycle looks a lot like a motorized wheelbarrow with a seat facing towards the two smaller tires. An O handlebar allows the driver the functions of acceleration, starting and stopping, while his feet rest on built-in pegs. To account for the potential difficulty of turning corners with two front wheels, the Amantide Electric Trike has arms that pivot for increased agility.
3.1
Score
Popularity
Activity
Freshness
View Innovation Webinars