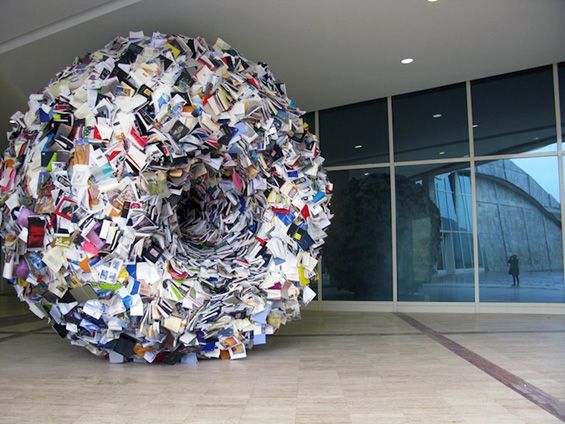 Meghan Young — January 7, 2014 — Art & Design
References: galica.it & beautifuldecay
Share on Facebook Share on Twitter Share on LinkedIn Share on Pinterest
From donut shapes and vortexes to massive piles that appear to burst out of walls, artist Alicia Martin has continued to escalate her book sculptures to the point of ultimate surreality. Although some people might believe nothing can top Biografias, in which a building seemed to be spewing out a fountain of books, these sculptures are even more impressive.

Based in Madrid, Spain, Alicia Martin explores the idea of these literary tomes overtaking the world around them. Considering that they are often vehicles of creativity and imagination themselves, it is only natural that Alicia Martin would feed off of that to produce such masterpieces. Not to mention that she gives much life to what will soon become defunct objects. Yet through Alicia Martin, that might not be the case anymore.
2.3
Score
Popularity
Activity
Freshness
Access Advisory Services