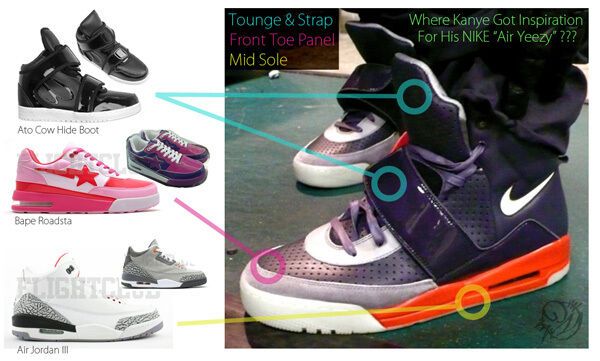 Ian Charles Blair — October 31, 2008 — Celebs
References: kicksonfire
Share on Facebook Share on Twitter Share on LinkedIn Share on Pinterest
Any 'Back to the Future' fan may note a similarity between the Nike Air Yeezys and Marty McFly’s 2015 light up, self-lacing kicks. Of course, Kanye’s shoes don’t seem to lace themselves, but most buyers of this retro-futuristic gem will be too young for back problems anyway, (and too cool to need laces.)

The lack of embedded blue lights on the sides and back, however, did leave me disappointed to some degree. I remember wearing light up shoes in the second grade, and expect to have at least the same technology in a $100 plus pair of Nikes. That’s right, they aren’t available quite yet, but fakes are going for $135, which says more than enough about the actual shoe’s value.

The image above, courtesy of kicksonfire.com, pictures one of four colorways to be available upon retail release; a nod of the head to the original Air Jordans, by the blue and orange. A tan version, a black and white, and a white and gray colorway will also be available, but the only pictures so far are of Yeezy himself wearing them on tour.

The above picture also contains a breakdown of the shoes which inspired the Air Yeezys, and yes, similarities arise. The collaboration between the cowhide boots and the Air Jordans are duly noted, but keep in mind, Kanye has an obsession with Daft Punk, DeLoreans, and other futuristic, flamboyant memorabilia, so it’s not hard to see where he gets his ideas.

Either way, Kanye West has proven himself yet again as a powerful force in pop culture; Nike doesn’t make these kinds of deals with just anyone. I can only hope more colorways will be available shortly as I wasn’t too impressed with the original lineup. I expect some mind-blowing pastels from a guy like this, but hey, I’m sure he’s working on it. I won’t argue; Kanye’s got style, and apparently knows exactly what he’s doing. I just have to wonder if Michael J. Fox regrets not thinking this up first…
3.7
Score
Popularity
Activity
Freshness
Get Better and Faster