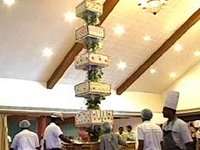 Cowbag — December 26, 2008 — Lifestyle
References: topix
There has not been a totally pointless record-breaking attempt highly publicized for a while, but that may have changed with the help of an Indian bakery. They attempted to break a world record by making a cake that stands 32 feet (9.75m) tall. Apparently it was baked to celebrate Christmas....

I am confused as the cake, made in the southern Indian state of Kerala, was supported by iron pipes and wooden planks in an effort to make it stable. So, does that make it a tall cake, or just lots of cake on scaffolding?

Either way, it took 15 days to make and weighed over 550kg.
1.3
Score
Popularity
Activity
Freshness