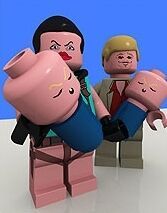 The lucky celebrities to be immortalized in LEGO include David and Victoria Beckham, Madonna, Simon Cowell and the judges from the UK series X Factor, Amy Winehouse, Angelina Jolie, and Brad Pitt with two of their babies.
6.5
Score
Popularity
Activity
Freshness
Get Better and Faster