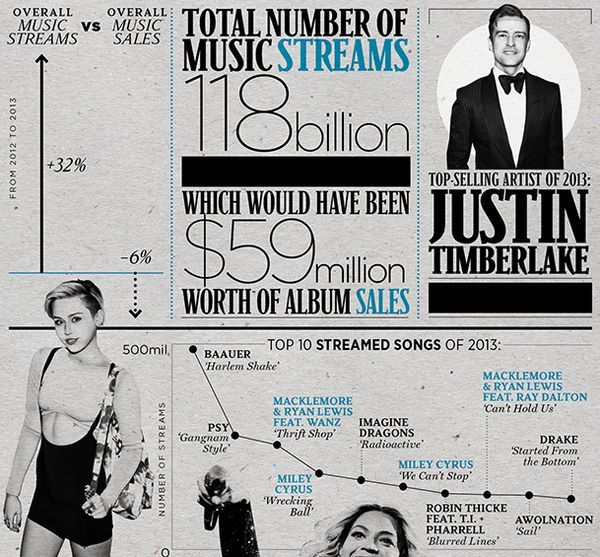 Laura McQuarrie — February 7, 2014 — Pop Culture
References: rollingstone & dailyinfographic
Share on Facebook Share on Twitter Share on LinkedIn Share on Pinterest
This infographic takes a look back at 2013 music sales as compared to those in 2012. Some notable events took place in 2013 with regards to the music industry, including Beyonce secretly releasing a brand new visual album on iTunes without any prior announcement. It had fans freaking out and downloading the album like crazy, so it's no wonder she had a total of 13 million total sales in 2013.

Although the numbers reveal that the annual amount of music streams was in the billions, surprisingly, CDs were still the most purchased format of music in 2013, but not by much.

Some of the songs that got the most plays in 2013 include the Harlem Shake and PSY's Gagnam Style, which both went viral on YouTube, as well as other songs from artists that are hard to ignore like Miley Cyrus, Drake and Robin Thicke.