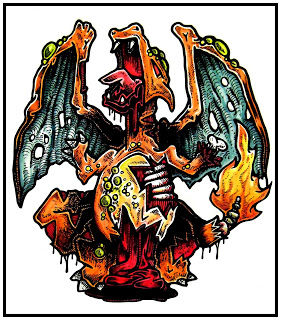 Artist Daryl Hobson is Creating His Own Zombie Pokemon

Mesel Isaac — February 12, 2014 — Pop Culture
References: darylhobsonartwork.blogspot & lostateminor
Artist Daryl Hobson is dedicating himself to the incredibly noble pursuit of turning all of the 151 original Pokemon into zombie Pokemon.

In what he is calling his 2014 Zombie Pokedex, Hobson’s zombified Pokemon are a grotesque and macabre version of their former cute selves. So far, Hobson has created 75 zombie Pokemon and hopes to be able to finish the remaining 76 by April. These zombie Pokemon are missing huge chunks of flesh, missing limbs, have rotting skin, exposed brains and missing eyes -- you’d he hard-pressed to find someone who’d be willing to capture these Pokemon.

With zombies being the new hot thing right now, it’s only natural to revisit one’s childhood and attempt to give them the zombie treatment.
2.6
Score
Popularity
Activity
Freshness