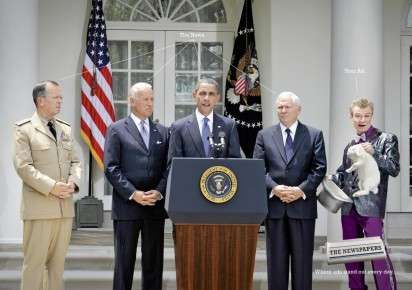 Meghan Young — June 28, 2012 — Pop Culture
References: ogilvy & ibelieveinadv
Share on Facebook Share on Twitter Share on LinkedIn Share on Pinterest
Right away, people will be able to pinpoint the odd person out in the ZMG Newspaper Marketing Association ad campaign. From a flamboyant magician posing alongside President Obama and his administration to a showgirl sandwiched in a political protest, there is no hiding these colorful characters. Of course, that is the point. The campaign itself reads, “Where ads stand out every day.”

The ZMG Newspaper Marketing Association ad campaign was conceived and executed by the Ogilvy ad agency based in Frankfurt, Germany. Art directed by Till Schaffarczyk and Christian Kuzman with creative direction by Dr. Stephan Vogel and Helmut Meyer, it shows that even in light of important events, this company will ensure that their reader's take note of the advertisements as well. The campaign was shot by photographer Norman Konrad.
2.4
Score
Popularity
Activity
Freshness
Get Trend Hunter Dashboard