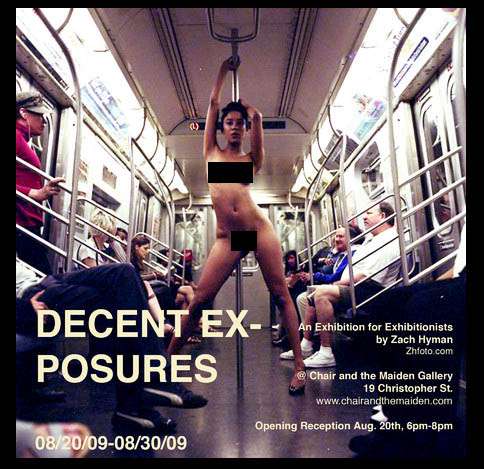 Katherinev123 — August 23, 2009 — Naughty
References: zhfoto & weeklyworldnews
Share on Facebook Share on Twitter Share on LinkedIn Share on Pinterest
New York City photographer Zach Hyman has made it his project to take photos of women naked on subway trains for a set called ‘Decent Exposures.’ Along with the train, Hyman also takes nude photos (of both men and women) on busy public streets like Time Square and Chinatown. The models have 30 seconds to strip so that Hyman can take 10 photos as quickly as possible. His friends keep their eyes open for cops.

If you’re a regular straphanger, chances are you’ve seen your fair share of abnormal behavior during your daily commutes. But the “typical” offbeat activity aside, you probably haven’t seen a woman strip down to nothing for a quickie photo session.

Zach Hyman’s project—art, sensationalism, whatever you want to call it—is a dangerous one, which is why the photographer keeps bail money on him just in case. So far, however, he hasn’t been arrested. Said Hyman on the event that he is caught, “I have a clean record, so I’m open to the experience of getting arrested.”

As for the commuters who just so happen to witness these indecent photo shoots, most remain disenchanted and apathetic—save for one woman on the train who started screaming and another elderly man who “got the shakes.”

A collection of 14 of the nude photos will be exhibited at the Chair and Maiden Gallery in Manhattan on August 27th.
6.8
Score
Popularity
Activity
Freshness
Attend Future Festival Virtual