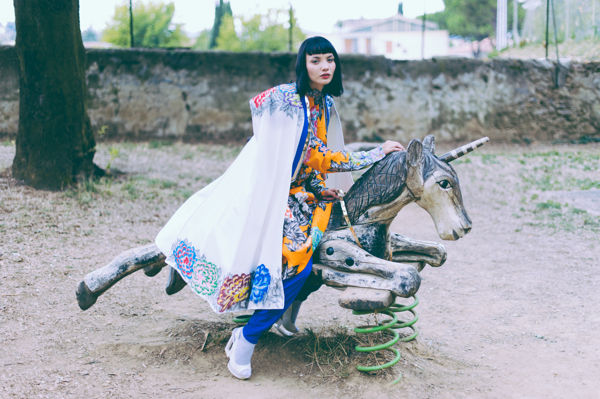 The 'Yin Yang Illusion' Editorial is Inspired by Chinese Opera

Anne Booth — October 2, 2013 — Fashion
References: behance.net & behance.net
Share on Facebook Share on Twitter Share on LinkedIn Share on Pinterest
In the fashion editorial 'Yin Yang Illusion,' the photographer Jui-Chen Hu is inspired by a Chinese opera and Chinese history, helping her to create this series. Jui-Chen Hu says, "the art of theater is one of the most important art forms, mostly because it serves from the royal family to public."

Throughout her photos we see elaborate, royal costumes worn, adding a very modern touch to these fashions. In one photo, a woman stands against a railing while wearing a bright orange jacket and orange pants. The woman also wears large geometric pumps that also add a modern edge to the editorial. The setting shows ponds and playgrounds in which the model plays about in her high-fashion looks.