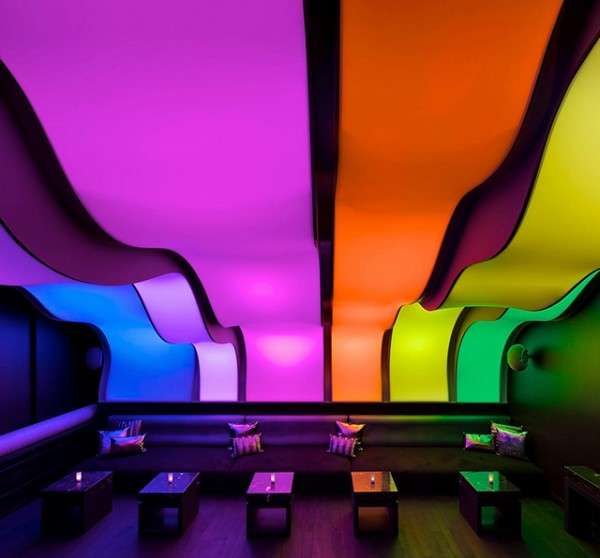 — May 8, 2013 — Luxury
References: wunderbarmontreal & inspirefirst
Share on Facebook Share on Twitter Share on LinkedIn Share on Pinterest
Inside the W Hotel in Montreal lies a sleek, understated bar just waiting to be lit up with all the colors of the rainbow -- literally. Every night the Wunderbar Lounge is given the royal rainbow treatment. Its ceilings and walls are divided into sections, each of which displays a stunningly bright color, from purple to orange to green.

The bar itself was inspired by the four seasons, and this is clear from the color scheme. The lounge's colors are arranged from coldest to warmest, as if in a cycle of seasons.

While the lights in the Wunderbar Lounge are fun and bright, the rest of the bar maintains a sleek, minimalist aesthetic. As stated on the Wunderbar Lounge website: "The sleek, multi-level lounge exudes the outdoors' vibrancy while offering amenities consistent with A-list destinations worldwide."

With its blending of country and city, the Wunderbar Lounge is the perfect place for anyone wanting celebrity-level service in an intimate setting.
6.7
Score
Popularity
Activity
Freshness
View Innovation Webinars