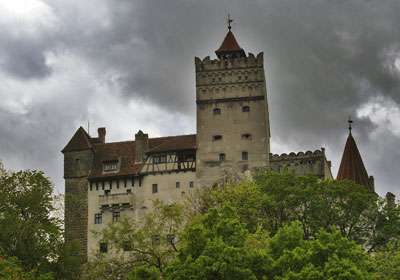 Instead of avoiding frightening situations, people are choosing to put themselves in them more and more, whether it be for extreme sports or travel, or, like we see here, places inhabited by tortured spirits.

For a blood curdling adventure, consider making the journey to one of the following haunted destinations.

Sleepy Hollow, N.Y. - Live shows are put on here every Halloween reenacting the Washington Irving's classic tale of The Legend of Sleepy Hollow, complete with Headless Horseman and other ghoulish characters.

Catacombs in Paris - An underground layer that housed bodies in the 18th century when the city's graveyards were overcrowded. Site goers have reported countless ghost sighting and eerie noises, including voices.

Tower of London - Another historical site plagued by tormented souls, this time by the wives of King Henry VIII. Anne Boleyn is said to have been spotted by several site visitors, walking the halls with her decapitated head in arm, seeking revenge on the husband that killed her to be with another woman.


For your trick-or-treat fix, remember that Trend Candy is the best kind of candy! It stimulates the mind, entertains, informs, and best of all, is calorie free!
2.1
Score
Popularity
Activity
Freshness
Jeremy Gutsche Keynote Speaker