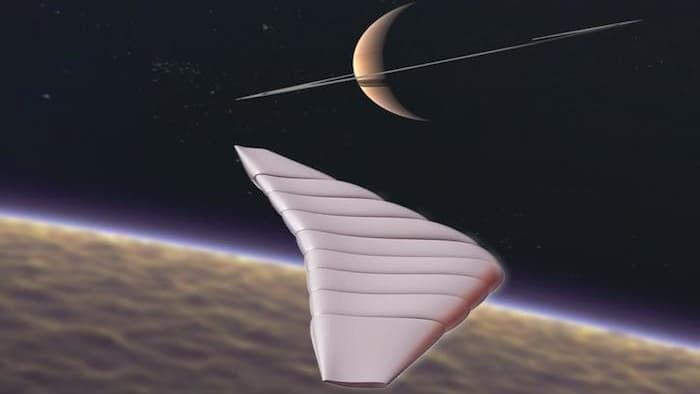 The NASA-Funded 'Titan Winged Aerobot' Can Glide Over Saturn's Moon

Joey Haar — July 11, 2016 — Tech
References: hou.usra.edu & gizmag
Share on Facebook Share on Twitter Share on LinkedIn Share on Pinterest
The 'Titan Winged Aerobot' is a hang glider-shaped balloon that might one day soar through the atmosphere of Titan, Saturn's most intriguing moon. Funded as part of Phase I of NASA's Small Business Innovation Research program, the concept is set to be developed by the Global Aerospace Corporation in collaboration with Northrop Grumman Aerospace Systems.

The biggest advantage of the Titan Winged Aerobot is its versatility: it functions as a three-in-one entry vehicle, balloon and glider. Respectively, this means the aerobot can enter Titan's atmosphere, increase and decrease altitude and investigate wide-spanning sections of air space all without the need for any other assisting vehicles.

Titan has long interested planetary scientists because of evidence that it may contain a subterranean sea of liquid water, which thus offers the possibility or extraterrestrial life. The Titan Winged Aerobot could bring humanity closer to such a discovery.
3.5
Score
Popularity
Activity
Freshness
Jeremy Gutsche Keynote Speaker