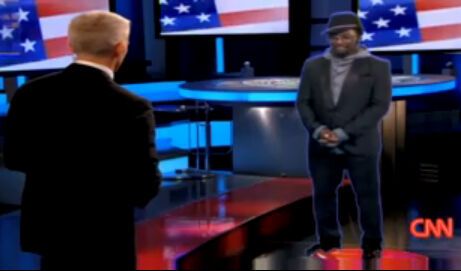 The Will.i.am hologram is an incredible way to rouse attention, and could be a glimpse into the future. His hologram was beamed into the Chicago studio for a live from Grant Park, for a very Star Trek interview with Anderson Cooper.

The Black Eyed Peas star has had a heavily influence on the Barack Obama campaign over the last months. Not only did Will.i.am sing hit tributes to Senator Obama, but he also had his music videos backed my pro-Obama celebrities like Scarlett Johansson and Jessica Alba.

"This is great, we're at an eve of a brand new day in America. It feels good being here in Chicago; all this technology I'm being beamed to you like in Star Wars," Will.i.am said.

He goes on to tell Cooper that he wanted Obama's speech to inspire children today the way speeches by Abraham Lincoln, Martin Luther King and John F Kennedy inspired him. To do that, he remixed Obama's words, added melody and called his friends to compile the video.

He described his Obama music videos as "lending my career to inspire people to go out and vote and being the voice for young people."

Check out the video for the world's first holographic news cast.
2.9
Score
Popularity
Activity
Freshness
Get Better and Faster