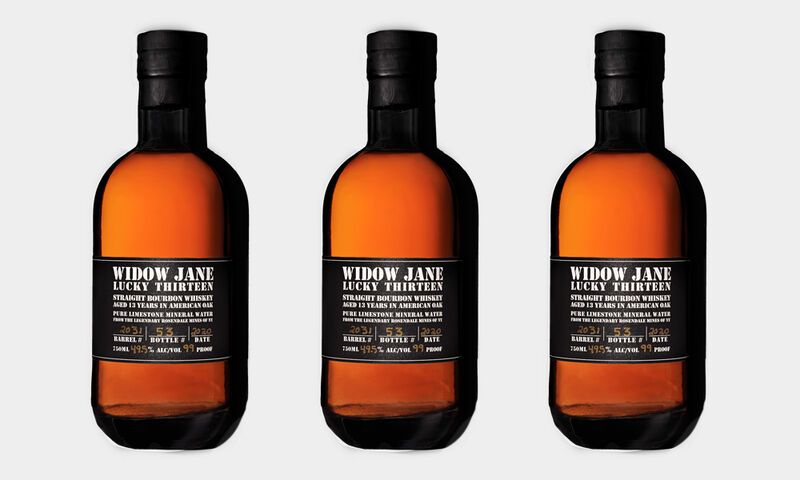 Michael Hemsworth — July 3, 2020 — Marketing
References: widowjane & coolmaterial
Share on Facebook Share on Twitter Share on LinkedIn Share on Pinterest
The Widow Jane Lucky Thirteen Bourbon is a premium American spirit from the Brooklyn-based distillery that will provide connoisseurs with a product that embraces variance. The spirit is made using pure limestone mineral water, which is. sourced from the Rosendale Mines located to the north by 100 miles of the distillery. The straight bourbon whiskey is limited to a 100 barrel yield, and will be available as part of a limited run of just 15,000 to 20,000 bottle nationwide at a priced point of $90 per bottle.

Widow Jane President and Head Distiller Lisa Wicker spoke on the new Widow Jane Lucky Thirteen Bourbon saying, "Think of Lucky Thirteen like your favorite song played live. A great touring band may play the same set of songs every night, but those songs will sound a little bit different from night to night. The beauty is in the variance, and this whiskey’s no different. Each barrel of Lucky Thirteen is influenced by the greatly varying temperatures and humidity levels of their original source and their time in our rick house in Red Hook, Brooklyn. The different rick house positions combined with climate variations have led to subtle deviations in flavor and alcohol strength."
1.7
Score
Popularity
Activity
Freshness
Get the 2023 Trend Report FREE