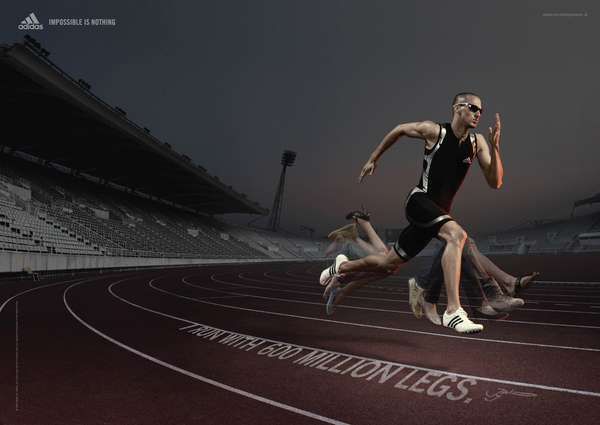 Adidas Ad: Impossible is Nothing With 600 Million Legs

The ads try to spread the enthusiasm by making you feel like part of the action. It shows that the athletes are not playing for themselves only, but that their whole country plays with them.

In a nod to the population of America, track star Jeremy Wainer proclaims, â€œI run with 600 million legs.â€ Another ad shows an awesome high kick by Yang who says, â€œThey see me, but they'll feel us.â€

Other quotes include, â€œI never lift alone,â€ â€œNo one gets up when a whole country kicks,â€ and â€œEver seen a nation fly?â€

I like the concept. People do have a sense of patriotism when it comes to their national players in international games. And I must say that the multiple legs shots could be used effectively as fashion ads for shoes. You can creatively have tens of pairs in one ad!

Photographed by Nadav Kander, the ads are created by TBWA TEQUILA Hong Kong.