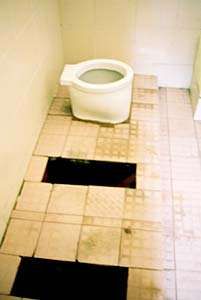 That's tip number one for anyone planning a visit to Beijing.

That and prepare to lower your standards as well as your stance â€“ squatting is still the way they to go in many parts of Asia.

But where is the trend, then? How is this old fashioned hole-in-the-ground anything new?

Well, they do argue that they are much ahead of the times when it comes to being more sanitary. They argue that Westerner's have poor hygiene standards and opt to squat even when using European toilets. Forget laying down paper, they get right up on the lid and straddle the seat.

But really, they are making advances. An article published by Reuters earlier this week commented on Beijing's desire to make the city's restrooms more Western-friendly. Signs, for example, must also be written in English, and those already labelled â€œWCâ€ must be relabelled as â€œtoiletsâ€.

â€œIn many Western countries the don't use the term W.C. at all,â€ the Beijing Morning Post reported. â€œIn English, it's the equivalent to what we would call in China an outhouse, and is a rather crude slang term.â€

Right: so their concern is the title of their bathrooms?

They should worry more about signs saying â€œPiss is OK, but shit, no way!â€ that are frequently posted outside public facilities. Stocking up on toilet paper should also be a priorityâ€”Westerns aren't used to packing a personal stash of TP for that tinkle-on-the-run.

Pity the Westerner who dares taste some authentic Asian cuisine: and ends up with the trots. He may be momentarily relieved to finally find a bathroom, yet will be utterly bewildered when he discovers a long trough where â€œprivacyâ€ consists of half-metre high dividers.

It's not uncommon to watch Westerners walk into public bathrooms and right back out: only to walk back in again: and then out a few seconds later. Their bladders are ready to rupture, but their heads are not quite willing to allow themselves relief.

But the bladder often wins, and then it is time to pop a squat. Which way to face? Towards the drain or away? Women need to learn to aim for the first times in their lives. Once the optimal butt leverage has been established, and feet are planted on the ground, she must find a way to balance herself. Steadying herself on the urine-soaked ground is not really an option (women have a real hard time with this whole aiming thing!) since soap is rarely provided at the sinks.

Sound too horrible to be true? It gets worse, as reported be TheBeijingGuide.com
â€œHutongs (old alleyways) also frequently have public toilets as many residents will not have toilets in their homes, only buckets for nighttime and elderly.â€ Woah.

Because of the variation in toilet qualities, the Chinese government rates public bathrooms with a star system. The one-star variety, for example, is flushed out with water once or twice a day, depending on traffic.

Toilets can be quite the awkward experience, and one of the best ways to study the incredible ability to juggle several tasks at once. It's quite possible to catch a glimpse of a fellow squatter, newspaper spread across the knees, sending an SMS with one hand, while puffing away on a Marlboro with the other.

And we thought we understood the art of multi-tasking?

Forget about learning the Chinese term for â€œpass the T.P.â€, not only is there no toilet paper, but speaking is taboo bathrooms. No one makes eye contact, no on exchanges a word.

But really, they have made progress, and there is a trend. The automated flush squatter. Still a hole in the ground, still a urine-soaked floor, still no toilet paper, but here, when you step aside, the sensor detects you are no longer squatting and the bowl is rinsed out.