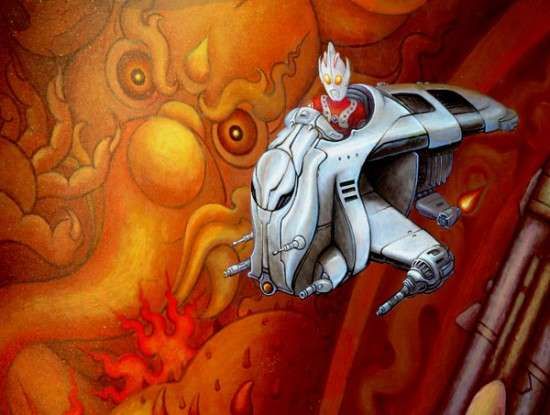 Corinne Guirgis — May 30, 2011 — World
References: 7thaiwonders & odditycentral
Share on Facebook Share on Twitter Share on LinkedIn Share on Pinterest
When describing Thailand's architectural wonder 'Wat Rong Khun,' unconventional is an understatement. The Buddhist and Hindu Temple is an artistic masterpiece both inside and out and certainly does not evoke what you would expect of a traditional place of worship. But traditional it is not, as its walls are decorated with murals inspired by modern Sci-Fi movies and its mind-blowing exterior comes complete with a bridge across a sea of human hands reaching out towards the sky.

According to Oddity Central, "Wat Rong Khun is entirely white, to symbolize Lord Buddha’s purity, and the mirrors used signify his wisdom, which shines brightly all over the Earth and the Universe.” Futuristic spaceships flown by robots, and superheroes that look an awful lot like Superman line the walls of this sacred place of worship. Other popular characters that can be seen inside the temple include the Predator, Neo from Matrix, Spiderman, Batman and even creatures from the Avatar movie.

Similar to 'La Sagrada Familia' designed by Spanish architectural icon Antonio Gaudi, the Wat Rong Khun temple is an incomplete work of art that is expected to be finished within the next 100 years. And just like the Gaudi cathedral, it should definitely be classified under "places to see before you die."
1.2
Score
Popularity
Activity
Freshness
View Innovation Webinars