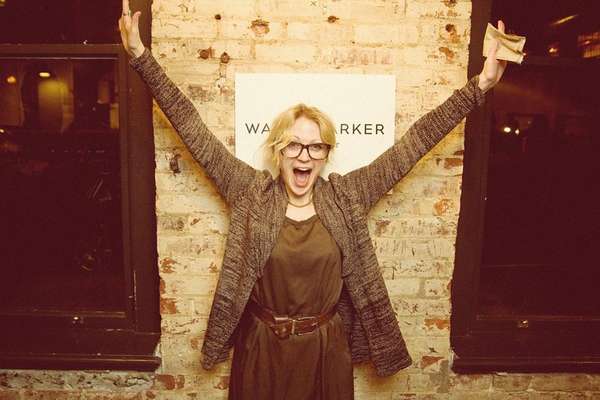 In the international development arena, access to eyewear has been underestimated as a tool to alleviate poverty worldwide. According to the Warby Parker website, one billion people don't have access to glasses. Manifestly, this lack of access to eye care has effects on learning and working, which in turn has ramifications on the ability of many to sustain their livelihoods. Interestingly, having a pair of functioning eyeglasses will increase someone's income by 20%. Thus, the possibility for impacting lives is untold. Indeed, since its launch last year, Warby Parker has distributed over 50,000 pairs of glasses in over 36 countries across Africa, Latin America, South Asia and the USA.

Founded by a foursome (Neil Blumenthal, David Gilboa, Andrew Hunt and Jeffrey Raider) that met at the Wharton School in Philadelphia, Warby Parker has a few crucial partnerships that helps the company along. Firstly, Warby Parker is partnered with VisionSpring, which is an innovative social enterprise that provides eye care to people in low-income countries, as well as integrates local women entrepreneurs into the mix so that they themselves are able to set up their own businesses to sell glasses. When eyeglasses are sold, Warby Parker donates both funds and glasses to VisionSpring.

By handing over the distribution of glasses -- and more importantly, limiting dependency for local communities -- the Warby Parker VisionSpring collaboration is a sustainable solution, especially when compared to charity and donation-driven initiatives that focus on short-term results.

Secondly, Warby Parker has recently released a limited edition pair of sunglasses with Invisible Children, a non-profit that uses storytelling as a method to help end the military use of children in Uganda. For each pair of sunnies sold, $30 will be donated to Invisible Children, and like all of Warby Parker's products, a pair of eyeglasses will be donated to someone in need.

Having been featured in Vogue, GQ and the New York Times, it's not Warby Parker's social mission alone, though, that sets it apart in the eyewear industry. Warby Parker's vintage-inspired frames and prescription lenses look like they could set you back $400, but in reality, they're all currently capped at a price of $95. Warby Parker is one of many social businesses that are appealing to young urbanites who are dissatisfied with their run-of-the-mill designer brand and are looking for businesses that deliver more than just fashion.

Superhero Specs
The Secret Identity Kit Masks You in Monotony