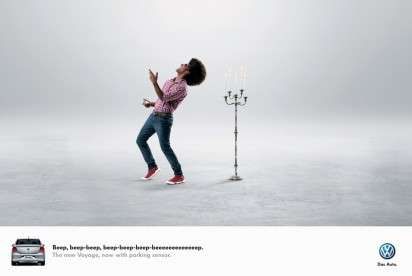 Meghan Young — October 2, 2012 — Autos
References: almapbbdo.br & ibelieveinadv
Share on Facebook Share on Twitter Share on LinkedIn Share on Pinterest
While some people might joke about having eyes at the back of their head, others such as those starring in the Volkswagen Voyage campaign probably wish that they really did, despite how freakish that would make them. If it meant avoiding imminent danger such as setting one's afro on fire of attracting a ferocious brown bear, being a freak would be worth it. As it stands, the Volkswagen Voyage campaign offers an easier solution, at least when it comes to driving.

Conceived and executed by AlmapBBDO, an ad agency based in São Paulo, Brazil, the Volkswagen Voyage campaign promotes the vehicle's parking sensor capabilities. Complete with a "beep, beep-beep, beep-beep-beep-beeeeeeeeeeeeep," the print ad shows just how effective the parking sensor is. Hair will stay intact, bear attacks will be avoided and car bumpers will remain unscathed.
2.3
Score
Popularity
Activity
Freshness
Get the 2021 Trend Report FREE