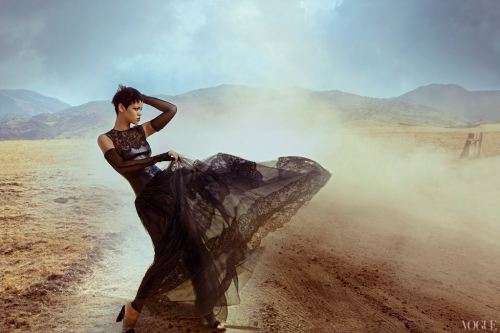 Meghan Young — October 15, 2012 — Fashion
References: vogue & whoisscout
Share on Facebook Share on Twitter Share on LinkedIn Share on Pinterest
Promoting her seventh studio in an impressive seven years, Rihanna once again reprises her role as a Vogue cover girl for the Vogue US November 2012 issue. Titled 'Unapologetic,' she appears to adopt that sentiment in this editorial. Stunningly cinematic, this photoshoot takes place in the countryside where dirt roads, dark forests and rocky grounds abound. Yet the Barbadian recording artist and actress is not styled in complementing outfits. Instead, the lacy gowns, caged skirts and stockinged arms contrast beautifully with the natural setting.

The Vogue US November 2012 cover shoot was shot by renowned photographer Annie Leibovitz. Styled by Camilla Nickerson, the looks are at once romantic and edgy. Rihanna shows why she is at the top of her game.
6.4
Score
Popularity
Activity
Freshness
Get Trend Hunter Dashboard