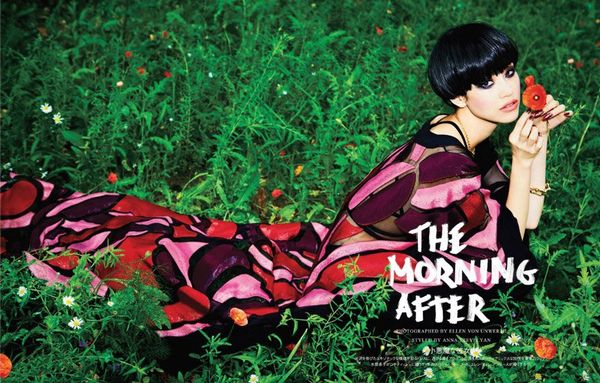 The Vogue Japan 'The Morning After' Photoshoot Stars Kiko Mizuhara

Meghan Young — January 14, 2014 — Fashion
References: vogue.co.jp & fashiongonerogue
Share on Facebook Share on Twitter Share on LinkedIn Share on Pinterest
The Vogue Japan 'The Morning After' editorial may focus on the walk of shame (or at least that is one interpretation of its title), but there is nothing shameful about how model Kiko Mizuhara looks at all. Exclusively showcasing the Gucci SS14 collection for the photoshoot, she is an stunning dream that any man would want to wake up next to.

Shot by photographer Ellen von Unwerth, who happened to capture the South Korean beauty for Vogue Italia January 2014 issue, the Vogue Japan 'The Morning After' editorial is set to appear in the February 2014 issue of the magazine. Bringing the vibrant patterns and mesh detailing to life against equally colorful backdrops, the looks were styled by Andrea Trevelyan with hair by Charlie Le Mindu and makeup by Regine Bedot.
5.3
Score
Popularity
Activity
Freshness
View Innovation Webinars