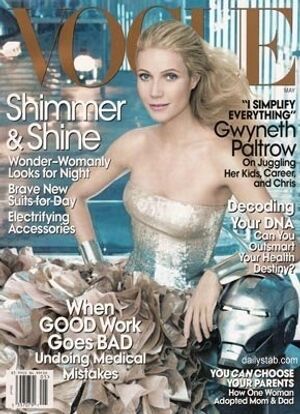 Bianca — April 3, 2008 — Pop Culture
References: catwalkqueen
Share on Facebook Share on Twitter Share on LinkedIn Share on Pinterest
The cover of this month's Vogue has gotten a lot of buzz, but just as the hype began to fade, a spoof has been created with none other than the much gossiped about Anna Wintour, the editor in chief of US Vogue and S.I. Newhouse.

For those who don't know, Samuel Irving Newhouse Jr is the chairman and CEO of Advance Publications which owns CondÃ© Nast, the publishing house that produces Vogue and other magazines like Vanity Fair and The New Yorker. That essentially makes him the boss of Wintour, a woman, feared by almost all in the fashion industry.

The cartoon sketch looks like something from MADD Magazine, but was actually featured in the New York Observer.

"The 'Mag as Hell!' issue covers a range of interesting and pertinent subjects such as the death of old-school journalism and the fate of magazines in the 21st Century," Catwalk Queen says.

Newhouse makes a not-so-stunning Gisele Bundchen and Wintour is posed in place of LeBron James, looking appealingly unattractive, with her nostril flare like a dangerous, fire-spewing dragon's. Yikes.

Annie Leibovitz, who shot the cover, was first criticized for using the Vogue shoot as a sly tribute to an older military recruitment poster.

"The references by photographer Annie Leibowitz to one image in particular, identified earlier this week by a tipster to Jezebel, are unmistakeable," Gawker says. "This First World War army recruitment posterâ€”urging loyal Americans to destroy a "mad brute"â€”features a Kong-like gorilla with a right arm holding a weapon and a left gripping a virginal white beauty. It's much like the position basketball star LeBron assumes on the Vogue cover."