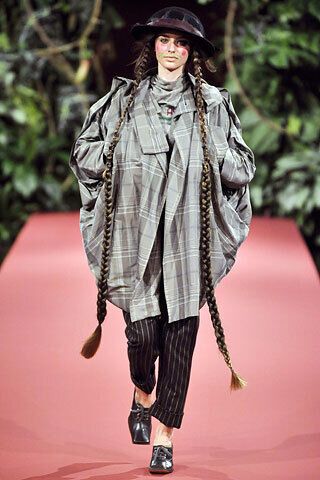 Vivienne Westwood Gets Odd For Fall 2008

The quirky Fall 2008 show had odd fashion pieces and the hair and makeup, which looked more like face paint you'd have done at a county fair, to match. The showed looked like a compilation two young girls would have put together, a combination of their mother's closets and the treasures they found in their dress up box, including pieces from grandmother's old wardrobe.

I'd even suggest a few pieces from dad's collection inspired certain pieces, including shoes which were so square in front, they could have doubled as shovels, and jackets that would be aptly suited for an old history prof. One pinstripe piece was worn with stilts and a hat that looked like it came from grandpa's navy days.

The part that I don't understand is that this is from the designer's Ready-to-Wear collection. Couture, OK, I would understand, but none of these pieces looked as though they were ready to go anywhere beyond a theatrical living room set up.
2.8
Score
Popularity
Activity
Freshness
Access Advisory Services

51 Beautiful Braid Hairstyles
From Brazen Braids to Sizzling Side Braids