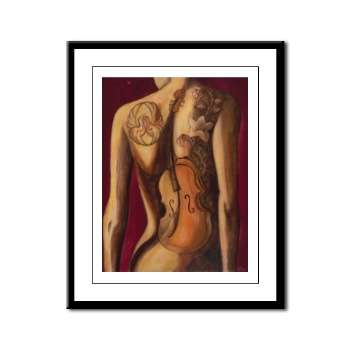 Geebee Micro — March 16, 2009 — Art & Design
References: mintmusems.org & salisburypost
Some of the greatest works of art over the last four centuries is being exhibited at the Mint Museum of Art in Charlotte, NC, including greats like Rodin, Renoir, Monet, Picasso and Degas.

The extraordinary collection comes from the New Orleans Museum of Art which, because of Katrina and the damage it caused four years ago, has sent their works out to raise money for the museum.

One piece from Picasso particularly interested me, the “Table with Bottle and Violin.” Picasso actually used a French newspaper in the shape of a bottle as part of his work.

That made me want to look at some of the amazingly different art pieces that have included violins. In many cases it’s hard to tell if the violin is the centerpiece or a prop. Either way, almost every type of discipline and style has included the violin as a part of the story being told.

We never seem to tire at looking at this unique instrument as replicated in a variety of art forms.
0.7
Score
Popularity
Activity
Freshness

Upcycled Premium Bag Series
Monarc is Designed to Enhance Your Carry for a Sustainable Lifestyle.
play_circle_filled