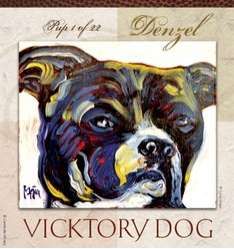 The 'Vicktory Dogs Collection' contains 22 individual labels, each of which is named for one of the 22 dogs rescued from Michael Vick's home and Bad Newz Kennels and features that dog's portrait. Cyrus Mejia, the artist of the dog portraits, began painting the imperiled pitbulls after they arrived at Best Friends Animal Sanctuary, where they now reside.

According to Carivintas Winery, 10% of each sale from the 'Vicktory Dogs Collection' goes to Best Friends Animal Sanctuary, where it will be used to conquer dogfighting around the country and oppose laws that target specific dog breeds like pitbulls.
2.6
Score
Popularity
Activity
Freshness
Jeremy Gutsche Keynote Speaker