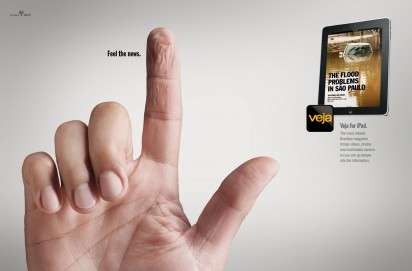 Meghan Young — April 30, 2012 — Marketing
References: g2brasil.br & ibelieveinadv
Share on Facebook Share on Twitter Share on LinkedIn Share on Pinterest
The Veja for iPad campaign brings to light the benefits behind tablet news apps. More emersive, interactive and extensive, this particular news portal offers so many different elements, people might as well be touching the real situation they are learning about. This sentiment is illustrated through the tag line, 'Feel the news,' which is accompanied by images of fingertips affected by the content on an iPad. For instance, a wrinkled fingertip is paired with the headline, 'The flood problems in Sao Paolo.'