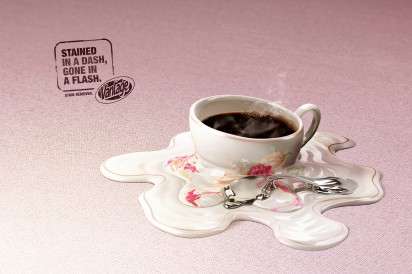 The Vantage Campaign Shows "Stained in a Dash, Gone in a Flash"

Meghan Young — May 29, 2012 — Marketing
References: dpz.br & ibelieveinadv
Share on Facebook Share on Twitter Share on LinkedIn Share on Pinterest
While the ketchup bottle and coffee cup featured in the Vantage campaign may seem like they are transforming into one big stain before the viewers' eyes, they are actually melting away thanks to the powerful stain remover. As stated in the tag line, "Stained in a dash, gone in a flash." Fantastically imaginative, the imagery may not be original, but it is playfully appropriate.

The Vantage campaign was conceived and executed by DPZ Propaganda, an ad agency based in São Paulo, Brazil. A simple concept, it is made up of images of the melting objects and a stamped slogan. Creative directed by Francesc Petit, Fernando Rodrigues and Rafael Urenha, the Vantage campaign was art directed by Tiago Zanatta and illustrated by Manipula with copywriting by Mariana Horta and Fernando Rodrigues.
1
Score
Popularity
Activity
Freshness
Get Better and Faster