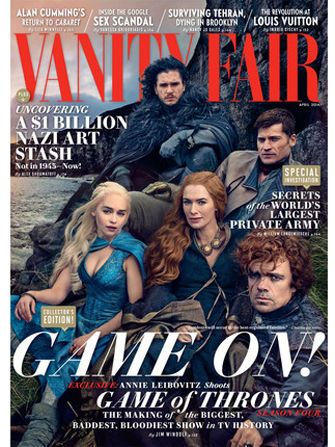 Meghan Young — March 12, 2014 — Pop Culture
References: vanityfair & refinery29
Share on Facebook Share on Twitter Share on LinkedIn Share on Pinterest
The world is waiting with bated breath for the return of a particularly beloved television show and the Vanity Fair Game of Thrones issue has all of the juicy gossip (and more) that will help tide them over until April 6, 2014, the premiere date of the fourth season. Not only does it include a stunning photoshoot shot by famed photographer Annie Leibovitz, it boasts an exclusive interview with both George R. R. Martin, author of A Song of Ice and Fire, HBO series producer David Benioff and a few cast mates such as Peter Dinklage.

The editorial, titled 'The Gathering Storm,' captures the breadth of the series' spectacular quality for the Vanity Fair Game of Thrones issue. Since the book series is still ongoing, the main concern addresses is if the television show will catch up too soon.
2.7
Score
Popularity
Activity
Freshness
Jeremy Gutsche Keynote Speaker