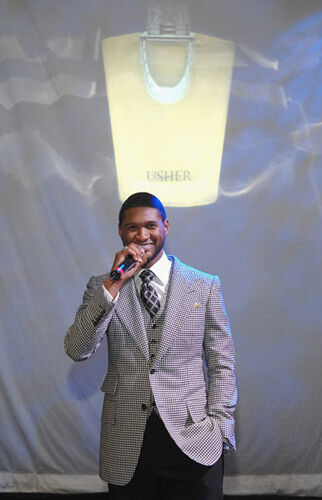 Glamboulevard — September 27, 2007 — Celebs
References: glamboulevard
For the past year, Usher was involved in the entire process making of the cologne, including the smell and the design of the bottles and boxes and now the fragrance is officially in stores. â€œI wanted to do something for my female fans as well as my male fans,â€ he says about the fragrances. â€œI want to leave everybody feeling right. I wanted to shut it all the way down. I felt the only way to get acclimated into this business is to take into account there are two directions you can go into: male or female. I take notes from great designers like Tommy Hilfiger, Giorgio Armani, Tom Ford. These people were able to fully introduce an entire lifestyle brand. Me, I decided to start with fragrance. Clothing is coming. There are other businesses and other ventures as an entrepreneur you can look forward to. This is the one that will get directly on your skin.â€
Last night, Usher officially launched his scent at Cirpiani with a phenomenal R&B guestlist including Beyonce, Jermaine Dupri, Ludacris, Nelly:and Martha Stewart!
4.6
Score
Popularity
Activity
Freshness