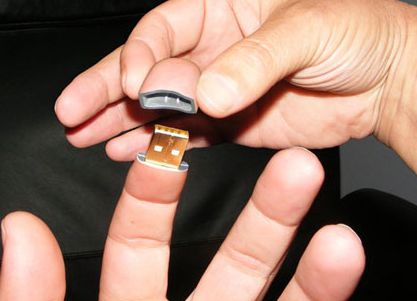 Amelia Roblin — December 19, 2013 — Art & Design
References: largecoin.tumblr & likecool
By this point in time, does it not seem that items like flash drives would ideally become extensions of our physical bodies? The USB Finger presents this idea in a very direct way. I wish I could provide more information regarding this corporeal tech concept, but a basic analysis will have to do.

Whether this is a digitally manipulated photo of a hand that's been modified to replace a digit with an thumbdrive, or if it's a strategically cropped picture in which a fake finger has been subbed in, one concept can be similarly considered. Perhaps it seems insufficient for the man of the future to carry a USB stick on his key chain, when he could become a hybrid human who's capable of uploading and downloading data with his very own body, perhaps with his USB Finger.
6.7
Score
Popularity
Activity
Freshness