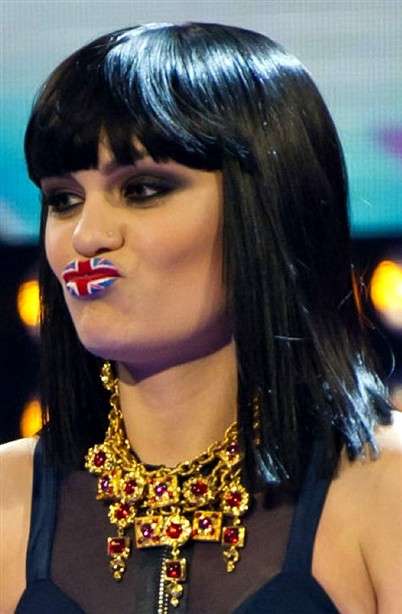 Carolina Olmos — June 21, 2011 — Celebs
References: violentlips & look
Share on Facebook Share on Twitter Share on LinkedIn Share on Pinterest
Pop princess and British number one artist Jessie J performed on Britain’s Got Talent rocking some incredible temporary lip tattoo, which is now a Violent Lips product called the Union Jack Applique. Before the show, she tweeted: “I’m so excited to perform on BGT tonight. In hair and makeup this one is going to be special.”

The 22-year-old quirky singer, with top ten singles in 25 countries worldwide, showed up on the stage wearing a black “mullet” dress, statement gold necklace, polished hairdo and with some Union Jack-decorated lips in honor of the show where she gave an energetic and great performance.

The trendy pop sensation helped launch “The Union Jack Applique” by Violent lips, a brand that has before come up with different and fun patterns including the purple cheetah, the red polka, the black and white stripes, the pink and white fishnet. And if you’re feeling patriotic, they also have the American flag print too. Each temporary “lip tattoo” lasts about 4-8 hours. Simply shape it, peel it, set it and wet it!
2.8
Score
Popularity
Activity
Freshness
Get Better and Faster