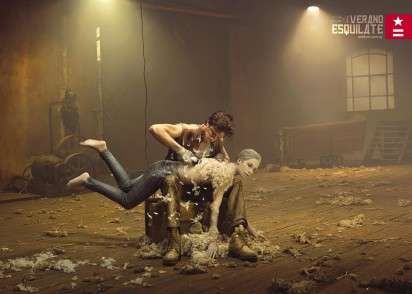 Meghan Young — September 25, 2012 — Fashion
References: ibelieveinadv
Share on Facebook Share on Twitter Share on LinkedIn Share on Pinterest
The Uniform Jeans Verano Esquilate ad campaign revolves around humans getting sheared. For those who thought that only happened with animals such as sheep, they'll have to think again. A surreal concept, to say the least, it encourages people to get rid of their winter fur and slip on something a lot more breathable and light. Granted, for those in the Northern Hemisphere, they will have to wait a couple of seasons before joining those in the Southern.

Conceived and executed by Plutón, an ad agency based in Montevideo, Uruguay, the Uniform Jeans Verano Esquilate ad campaign may seem dark and fantastical, but those elements are what will reel audiences in. It was art directed by María Bissio with creative direction by Silvio Maldonado and Pablo Medina.
6.5
Score
Popularity
Activity
Freshness
Get Better and Faster