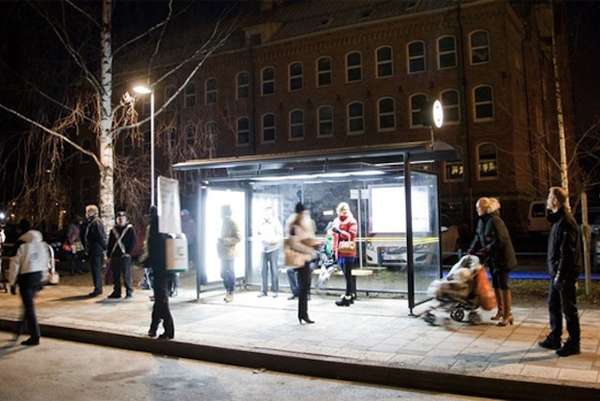 Meghan Young — November 30, 2012 — Art & Design
References: umea.se & psfk
Share on Facebook Share on Twitter Share on LinkedIn Share on Pinterest
Seasonal affective disorder can be a serious condition that leads to more than depressive moods during the winter season, especially in different cities throughout the world, and the Umea Bus Stops hopes to alleviate some of the symptoms. It involves specially illuminated shelters that provide light therapy.

Outfitted in 30 shelters across Northern Sweden, an area of the world that happens to have much shorter days during the winter months and even continuous darkness at points, the Umea Bus Stops has been outfitted with phototherapy lighting tubes. Umea states, "Winter is in many ways a fantastic season, with the darkness and the cozy atmosphere. But when the sun appears as a minimum, we need the energy the most." The Umea Bus Stops will provide some much needed relief in Sweden.
2.5
Score
Popularity
Activity
Freshness
View Innovation Webinars