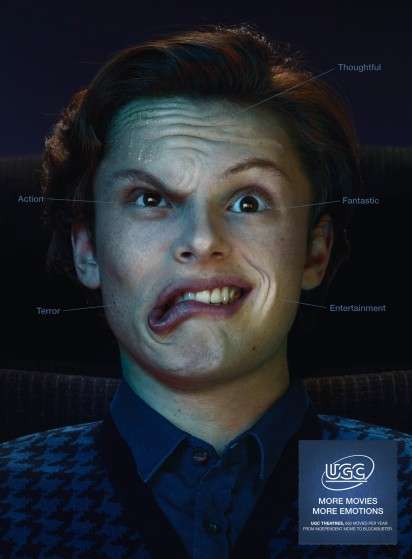 Meghan Young — May 10, 2012 — Marketing
References: tbwa & ibelieveinadv
Share on Facebook Share on Twitter Share on LinkedIn Share on Pinterest
The expressions featured in the UGC Theaters campaign may seem both impossible and ludicrous, but they convey a very important message--albeit a rather confusing one at first. Instead of trying to read the various expressions present on one face, it is easier to simply read the accompanying tag line, "More movies, more emotions." Thus, it becomes quickly apparent how many more movies there will be by the slew of emotions on the models' faces.

The UGC Theaters campaign was conceived and executed by TBWA, an ad agency based in Paris, France. Art directed by Philippe Taroux with creative direction by Philippe Simonet, Eric Holden and Remi Noel, the ad campaign is hilarious. In one image, fear, melodrama, comedy, anguish and thriller are impressively portrayed. It was post produced by Coralie Duarte.
3
Score
Popularity
Activity
Freshness
Get Better and Faster