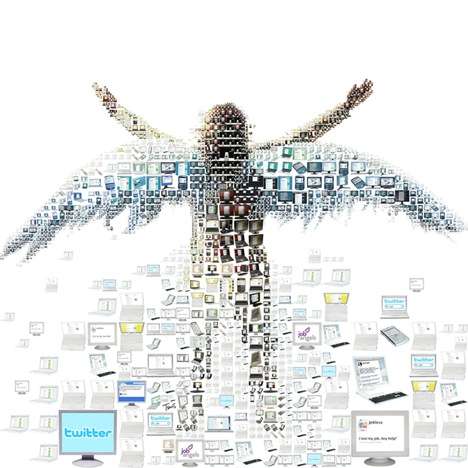 Marissa Brassfield — April 19, 2009 — Lifestyle
References: latimesblogs.latimes & behance.net
Share on Facebook Share on Twitter Share on LinkedIn Share on Pinterest
The latest Twitter craze is the 'Twitter Angel' phenomenon. One of the major players is Mark Stelzner, who read so many Twitter feeds about job losses that he was inspired to create JobAngels (@jobangels) with the thought that every person who followed him would find one person a job. His follower list grew to over 1,000 in two weeks as volunteers have stepped forward in droves to proofread resumes, disseminate job openings or hire job-seekers outright.

Metromix and the LA Times have each covered Stelzner and the other Twitter angels, and I stumbled across the incredible photo mosaic Charis Tsevis created for Metromix. The cover art for issue 13 features a Twitter angel comprised entirely of gadgets pointed to Twitter.
2.3
Score
Popularity
Activity
Freshness
Access Advisory Services