Silicon Valley Board Games
Next
Set of
Related
Ideas 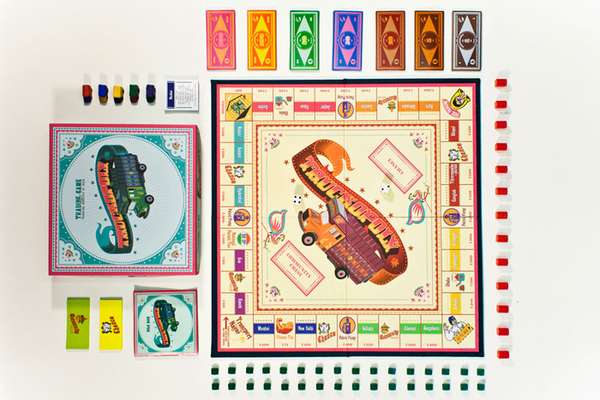 Susan Keefe — January 11, 2012 — Life-Stages
References: shantanusuman & thedieline
Share on Facebook Share on Twitter Share on LinkedIn Share on Pinterest
Shantanu Suman, a design student at the University of Florida, crafted this creative take on the classic board game Monopoly entitle Truckopoly. This interesting redesign is meant to pay tribute to the truckers of India. Much of the country's trade and commerce relies on the trucking industry. The object of this game is predictably to become the wealthiest truck owner, which is accomplished, as it is in traditional Monopoly, through buying, renting, and selling property and product throughout India. There are, of course, bumps along the way. A number of penalties and fines can be incurred by an absent-minded or unlucky driver.

Truckopoly sports aesthetics that are usually found on the sides of Indian trucks. Gathering most of the design inspiration from the truck industry, Shantanu Suman has crafted a vibrant and engaging board game that is just as much fun to look at as it is to play. There are a wealth of Monopoly redesigns out there, but few are as colorful and stimulating as Truckopoly.

If Monopoly is giving you a bad case of monotony, why not give the vivid and vivacious Truckopoly a whirl?
1.2
Score
Popularity
Activity
Freshness
View Innovation Webinars