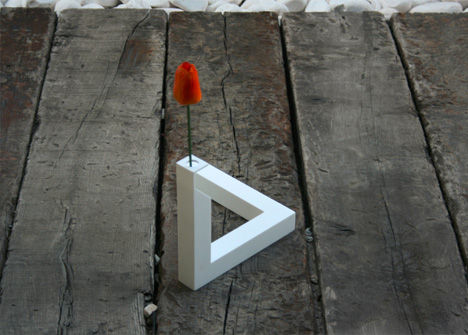 Laura McQuarrie — October 15, 2014 — Art & Design
References: api.viglink & dornob
This unique triangle vase by Cuatro Cuatros is a 3D object that's like a 2D optical illusion come to life. The vase takes the shape of a crooked line, but if you happen to sit at just the right angle, the design begins to look like an impossibly twisted triangle.

When viewed from other angles, the design of the vase looks like an abstract, unusual flower holder. In creating the project, Cuatro Cuatros describes that: "The interposition, orientation and perspective create a contradiction of the space that makes us perceive something that is not." Either way, the vase is a visually striking way to present a single flower in a way that's likely to make people do a double take.
6
Score
Popularity
Activity
Freshness