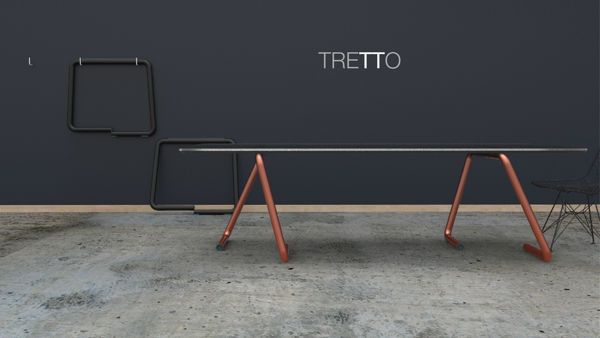 Tretto by Tim Defleur is Based on an Isostatic System

Meghan Young — February 14, 2014 — Art & Design
References: timdefleur & behance.net
Share on Facebook Share on Twitter Share on LinkedIn Share on Pinterest
Tretto by Tim Defleur, an industrial designer hailing from Bruxelles, Belgium, is an innovative trestle that is inspired by the articulation of human arms. It essentially takes on a common position when people lean on tables. Since this position clearly supports their upper body comfortably, the designer thought it would do just fine for tabletops as well.

The beauty of Tretto by Tim Defleur is that it also adds a dynamic feel to the design of such furniture pieces. Although still comprised of four legs, the table has a sense of movement that gives the otherwise minimalist design a playful vibe. According to the designer, "Using an isostatic system, TRETTO is strong enough to support different kind of plates, materials and sizes."
3.8
Score
Popularity
Activity
Freshness
View Innovation Webinars