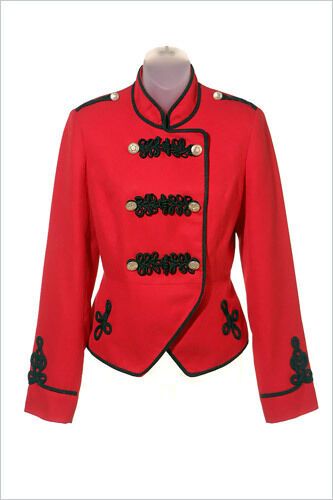 Military-chic not withstanding, and the influence of revolutions past, the proliferation of military style jackets and designs (not seen since the Beatles or Michael Jackson’s heyday) took front and center at Alexander McQueen, Givenchy, Balmain and Chris Benz at Paris Fashion Week.  Even vintage military looks sprung up at the Balenciaga shows.

If political unrest and financial instability are the reason for looks a la Sgt Pepper, chaotic and unpredictable economic times seem to drive other trends, such as over-the-top accessories, like gargantuan and oversize jewelry, in particular necklaces that somewhat resemble the love child of a giant squid and the collar of a Clydesdale.

In addition to these over the top embellishments, feathers adorn jewelry and just about everything else. Doug Abraham, jewelry designer and owner of Bess in NYC is experiencing a major moment. “I’ve been working with feathers for I don’t know how long,” he said. “White, black, brown, peacock ... I’ve always liked big, messy, feathers."

Abraham’s current collection features a gothic grouping of suede, lace and ravenlike feathers, which he has difficulty keeping in his store.

Young celebutantes have adopted these bold accessories while keeping many of their other fashion statements minimal. They''ll wear things like a pair of jeans with a wife beater, a sure fire way to keep economic strife at bay, while still being on trend.

While these influences rule the runways, on the street there’s also been a return to blue collar chic, with perhaps a surprising trend, featuring the traditional denim button down, previously the domain of the (hard)working class, witnessing its evolution into the popular uniform of the hip, young and trendy.

Another dramatic statement was the appearance of really dark, or bleached-to-invisibility eyebrows. While being relatively difficult to achieve successfully in real life, it’s just another example of fashion’s reaction to extremes of society.

As the economic climate continues to emulate global warming, it will be interesting to see what’s next.
2.6
Score
Popularity
Activity
Freshness
Get the 2021 Trend Report FREE