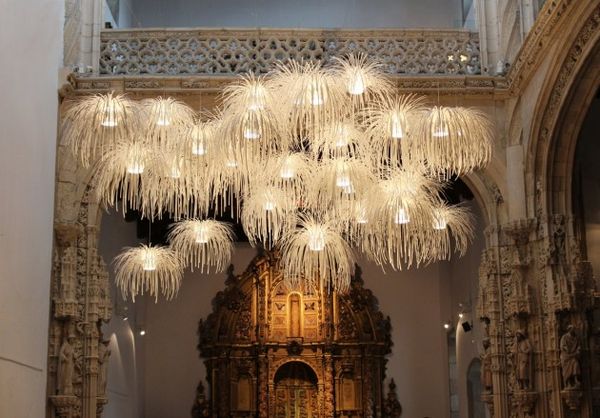 Meghan Young — November 20, 2013 — Art & Design
References: arturo-alvarez & contemporist
Some may argue that the sight of fireworks at the end of a long weekend is one of the most beautiful sights in the world; hence the reason Tina by Arturo Alvarez, a Spanish designer, could be regarded as quite enchanting. Each light fixture looks like the fruition of an exploding rocket. But instead of vanishing into thin air, it remains suspended indefinitely to the pleasure of those around it.

Tina by Arturo Alvarez has recently been installed at the chapel of the
Hostal dos Reis Católicos in Santiago de Compostela, Spain. Although undeniably contemporary, the pop-up lighting installation complements its medieval surroundings beautifully. According to the designer, it "symbolizes the happiness after finishing the Way of St. James."
3.8
Score
Popularity
Activity
Freshness