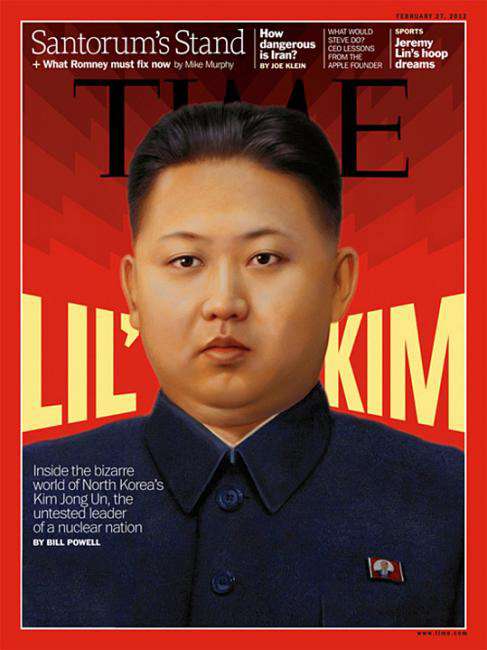 Rebecca Byers — February 21, 2012 — Pop Culture
References: designzzz & rwdmag
Share on Facebook Share on Twitter Share on LinkedIn Share on Pinterest
The Time Magazine Kim Jong-Un cover has given the newly appointed Supreme Leader of North America a new nickname that may have some hip hop fans a little confused. The February 27, 2012 edition of Time Magazine features a portrait of the late Kim Jong-Il’s son and deems him “Lil’ Kim.”

The Time Magazine Kim Jong-Un cover is an interesting use of rapper Kimberly Jones’ stage name, and adds an interesting layer to the ongoing feud between Lil’ Kim and Nicki Minaj, because who wants to mess with nuclear weapons? The “Lil” is also a fitting reference to the young age of the newly appointed leader of the nuclear nation, as he is believed to be around 27-years-old and has gone largely untested before taking over after his father’s sudden death in mid-December 2011.

Time Magazine covers have long held a certain level of cultural importance and many have maintained their relevance far after their publication. The Roy Lichtenstein cover in June of 1968 ‘The Gun in America,’ which followed the assassinations of Martin Luther King and Robert Kennedy, and 2011’s ‘Osama Bin Laden is Dead’ cover are both examples of this.
4.5
Score
Popularity
Activity
Freshness
Get Better and Faster