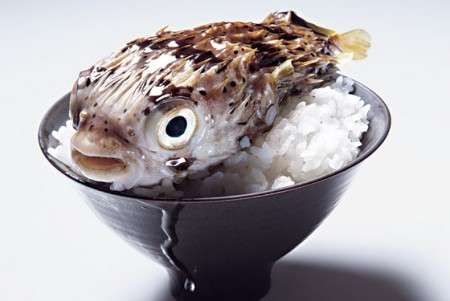 Bianca — April 28, 2008 — Unique
References: nymag
Share on Facebook Share on Twitter Share on LinkedIn Share on Pinterest
Some people like to live life on the edge, and while seek their adrenaline through extreme sports, others do it through extreme cuisine. The world's most deadly food is Torafugu or Tiger Fugu, the filet mignon of blowfish. The epitome of dangerous luxury meals is Tiger Fugu sashimi, served totally rare, to preserve each and every toxin.

"Among the intrepid TV hosts and iron-stomached bloggers who span the globe looking for horrible things to eat, a potentially deadly blowfish dinner is a badge of honor, the thrill-seeking gastronome's equivalent to scaling Mount Everest," New York magazine says.

The fish is loaded with lethal poisons; you'd have to have a very strong mix of courage and an intense lack of common sense to eat a meal like this. Then again for some, the bragging rights are worth it.

No one could argue that this was done purely for the taste -- this is to demonstrate your bravery (stupidity?) and willingness to endure any challenge; no way anyone would choose to eat this dish alone at home.