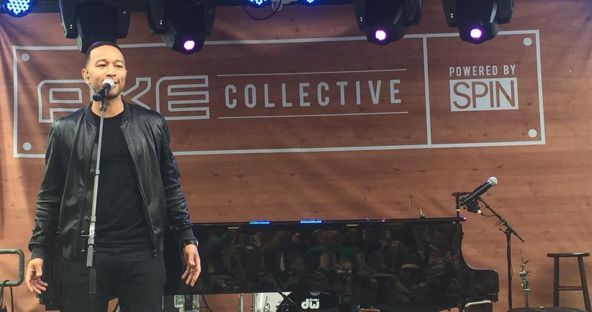 Katherine Pendrill — September 13, 2016 — Pop Culture
References: narcity
Share on Facebook Share on Twitter Share on LinkedIn Share on Pinterest
On September 13th, American Crooner John Legend will descend upon Toronto for TIFF 2016. While the Canadian film festival is largely a celebration of cinema, Legend will bring a little bit of music to the annual event by hosting a free concert for movie-goers.

To celebrate the Vanguard Films of TIFF 2016, Legend will throw a free concert outside of the Hot Docs Ted Rogers Cinema. Legend will also be joined by Mark Duplass of the Duplass brothers duo and TIFF Vanguard programmer Colin Geddes, who will be hosting a free movie night. The event is designed to recognize the work of three AXE Collective filmmakers, each of whom have been mentored by Legend and Duplass. If free movies and music weren't enough, there will also be complimentary snacks, sweets and cocktails available to attendees.
3.2
Score
Popularity
Activity
Freshness
Attend Future Festival