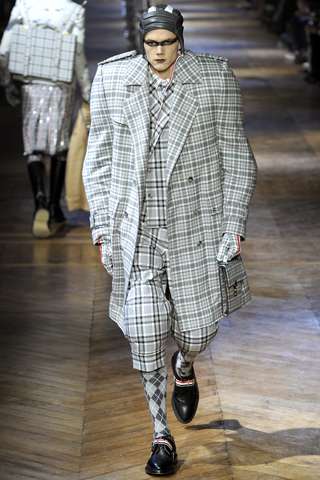 Katherine Vong — January 23, 2012 — Fashion
References: wwd & style
One look at the styles that were paraded down the Thom Browne Fall 2012 catwalk and you’ll most likely shake your head in disbelief that this designer is the very same man who started designing at Club Monaco, and then later at Brooks Brothers. While the pieces from the Thom Browne Fall 2012 show might feature the same preppiness—plaid prints, stripes and the like—as the two menswear brands, the similarities more or less stop there.

Referred to as the “American fashion prankster” by Women’s Wear Daily, Thom Browne released a series of punk-meets-rugby looks, including bulky blazers with shoulder pads for days, rugby-style headpieces and bizarre spiked masks. Other strange-but-true outfits included shrunken and cropped turtlenecks and shirts, as well as kilts and puppy-printed blazers. Some of the looks even featured merkins—which is a wig for your, er, nether regions.
5.5
Score
Popularity
Activity
Freshness