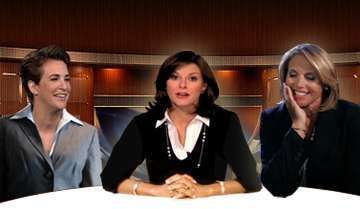 Jennifer Astle — October 31, 2008 — Social Good
References: rachelmaddow & salon
Share on Facebook Share on Twitter Share on LinkedIn Share on Pinterest
Look out Chris Matthews, Tom Brokaw, and Wolf Blitzer: Mainstream media is no longer an old boys' club.  The rise of female journalists, who not only report the news but also dissect it, critique it and understand it indicates that more and more individuals are heading to their favorite femme-journalists for their daily dose of political blunders, bad news and interviews.

The 2008 Presidential Election has facilitated huge spikes in ratings for the likes of Rachel Maddow, Campbell Brown and Katie Couric.  Maddow, since joining the nightly ranks of MSNBC with her program aptly named "The Rachel Maddow Show" has accomplished the impossible; she has nearly doubled MSNBC's 9 PM slot ratings, and did it almost literally overnight.

Campbell Brown reports regularly for CNN, and has expressed her desire to battle both the left and right on her show "No Bias, No Bull."  Lest we forget Katie Couric, who singlehandedly revealed Sarah Palin as less apt in foreign policy than a Zamboni machine and able to discuss Supreme Court rulings on the same level as first-year law student.

One can only ponder whether the sudden interest in female journalists is inextricably linked to the female candidate front and center in this race?  Is it possible that Sarah Palin shattered this glass ceiling, and not the one in D.C.?

Either way, let's hear it for the girls!
0.8
Score
Popularity
Activity
Freshness
Get Better and Faster