Anime Battle Board Games
Next
Set of
Related
Ideas 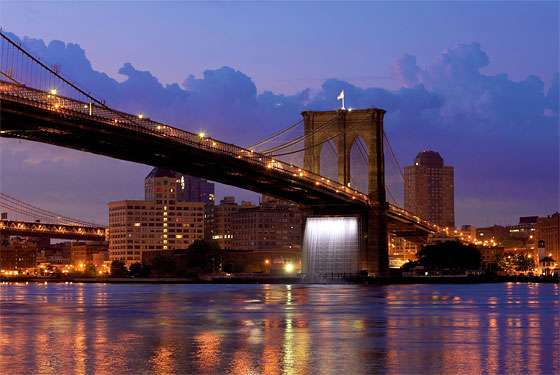 Bianca — June 30, 2008 — Art & Design
References: nymag
Share on Facebook Share on Twitter Share on LinkedIn Share on Pinterest
New York City now offers a spectacular public waterfall installation for those who yearn to see cascading falls but are far from what one would consider to be an outdoorsy type. There's no hiking involved to see Olafur Eliasson's The New York City Waterfalls, the $15.5 million project which opened last week. The project was commissioned by The Public Art Fund, a nonprofit group that installs art around the city.

"The waterfall under the Brooklyn Bridge is especially captivating and seems to appear out of nowhere like a portal from another dimension. The Governors Island cascade almost rises up from the surface of water. The one near the Brooklyn Navy Yards is like a primordial water spout. Lit at night, the falls turn ghostly. Coming upon each in a boat is like visiting an alien life form."

There are boat rides which tour the falls, which offer neat tidbits of information such as the fact that the biggest fall is taller than the Statue of Liberty.

The gallery shows 10 different magnificent views of the falls.